Saxonburg was founded in 1832 by two immigrants from Muhlhausen, Prussia (Germany), John Augustus and Frederick Charles (Carl) Roebling. Since opportunities for personal freedom and advancement in Germany were severely limited at that time, many people were interested in the new nation in North America.

An "Immigration Society" was organized in Muhlhausen by John Roebling, and several hundred families. They agreed to sail to America with John as their leader. The group departed from Bremen, Germany in May 1831 on two sailing ships, the Henry Barclay and the August Edward. However, upon arriving in Philadelphia they could not agree on where to settle. The Roebling brothers and three other men decided to travel to Pittsburgh where John Roebling located a large unsettled tract of land in southern Butler County. These lands had been assigned to Pennsylvania's veterans of the Revolutionary War as payment for their service, and much of it was then being sold to land speculators. In 1831, the land around Saxonburg had been inherited by Mrs. Sara Collins, daughter of land speculator, Stephen Lowrey.

John Roebling inspected the Collins' land and purchased approximately 1,600 acres for $1.50 per acre. Two of the other men purchased land nearer Freeport. Thus in the autumn of 1831, only three men of the original large emigration group, settled on the "Saxonburg" lands. During the next several months, they laid out the plans for the village of Saxonburg and John wrote numerous letters to his friends back in Muhlhausen to encourage them to come to America. In the summer of 1832, several additional families arrived in Saxonburg and the community slowly grew over the next few years. Some families of the original society also came to Saxonburg, from places in America to which they had initially settled. Several houses were built the first year. By 1835 the village boasted a total of eleven (11) houses, and some of the 1830's houses are still in use on Main Street. Additional buildings, from the 1840's to 1900, make Saxonburg's Main Street a picturesque scene of earlier times.

John Roebling donated land for a church, along with a proposed plan for its construction. In 1837, church services were held in the newly constructed German Evangelical Protestant Church. The steeple and bell were added in 1863 and a large four-faced tower clock was added in 1919. This building still stands, at the highest area on Main Street, and is the focal point of the town. The Church Office is listed in the Pennsylvania Register of Historic Places.

In 1846, the residents petitioned the court in Butler County to incorporate Saxonburg as a Borough. A Burgess, Councilmen, and other officials were then elected. By 1880, sixty (60) families lived in Saxonburg. In 1892, the first gas lines were laid along Main Street to provide lighting for the residents. By 1895, Saxonburg enjoyed the following businesses: five hotels, two general stores, a drug store and doctor's office, a flour and feed store, a lumberyard, a wagon shop, an opera house, and two schools for the eighty-two (82) students.

Saxonburg in the 1880's enjoyed the prosperity of the oil boom in "Golden City" located one mile west of town. Like other boom towns, it appeared rapidly on the countryside and disappeared in a similar fashion.

Currently, annual celebrations include the "Mingle on Main" fair on Main Street every third Thursday from May to September, the Saxonburg Festival of the Arts during the second weekend in September, and the Holiday Parade on Black Friday. Mingle on Main and the Holiday Parade are organized courtesy of the Saxonburg Area Business Association (SABA). 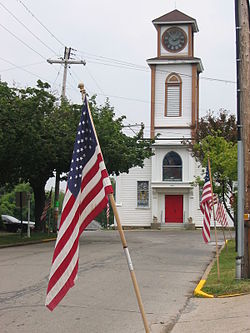